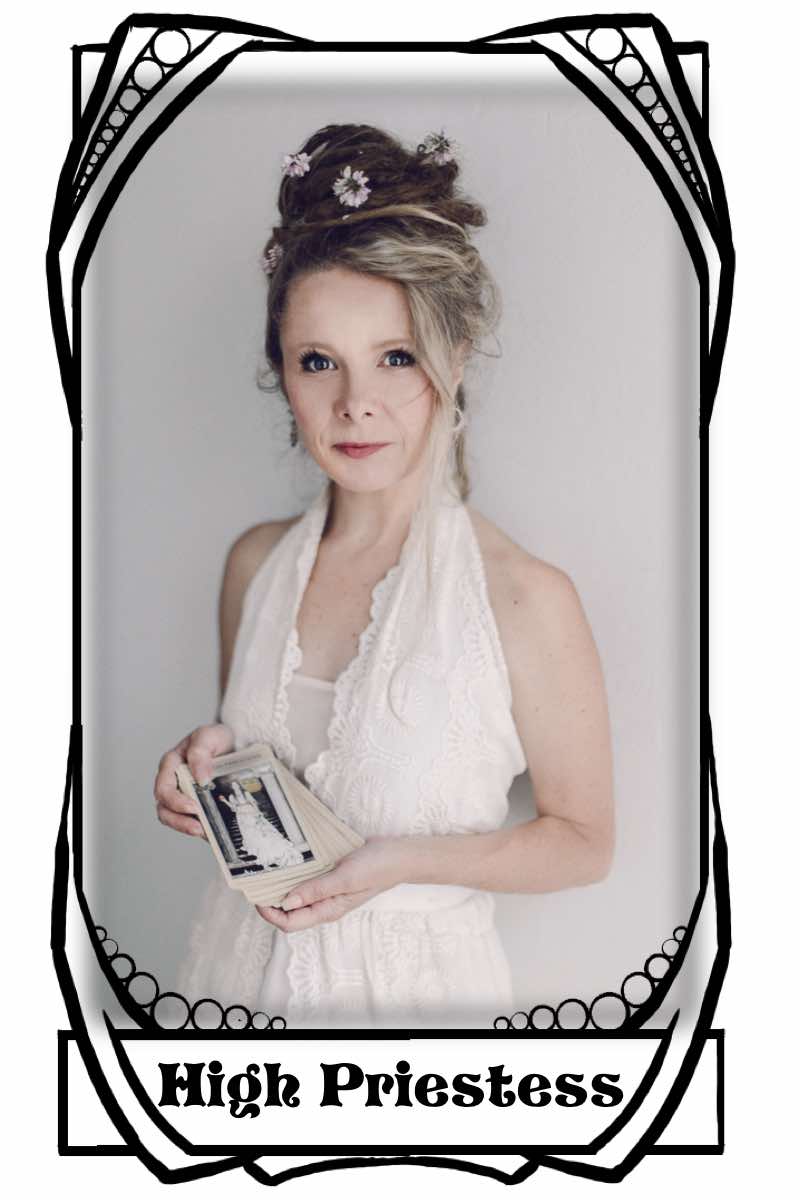 With 25+ years offering tarot card readings, I can provide you with an accurate and professional tarot reading. Explore this page to learn about how an intuitive card reader can work with you to provide guidance and insights.

History has shown that superstition and fanaticism prove dangerous. Equally hollow is the extreme of rationality which banishes anything that can’t be tangibly measured.

In the 30s’ the pre-eminent psychologist Carl Jung gave a lecture in which he spoke of the tarot saying that the cards “combine in certain ways, and the different combinations correspond to the playful development of mankind.”

The archetypes contained in the tarot speak to us at a deep level. Jung believed that whether through dream analysis, tarot or many other tools, we can access the wisdom of the cosmos to help us individuate and become more whole.

Often people come to see me for a reading because no amount of talking or navel gazing gives them adequate answers to make sense of a crisis or internal tension in their life.

The poet, Alfred Lord Tennyson said that, “The Shell Must Break Before The Bird Can Fly.”

In my experience, the tarot with its imagery and capacity to stir our mythic imagination is a marvellous tool to help us look at things with fresh eyes and a sense of optimism.

find out more about my tarot card reading online 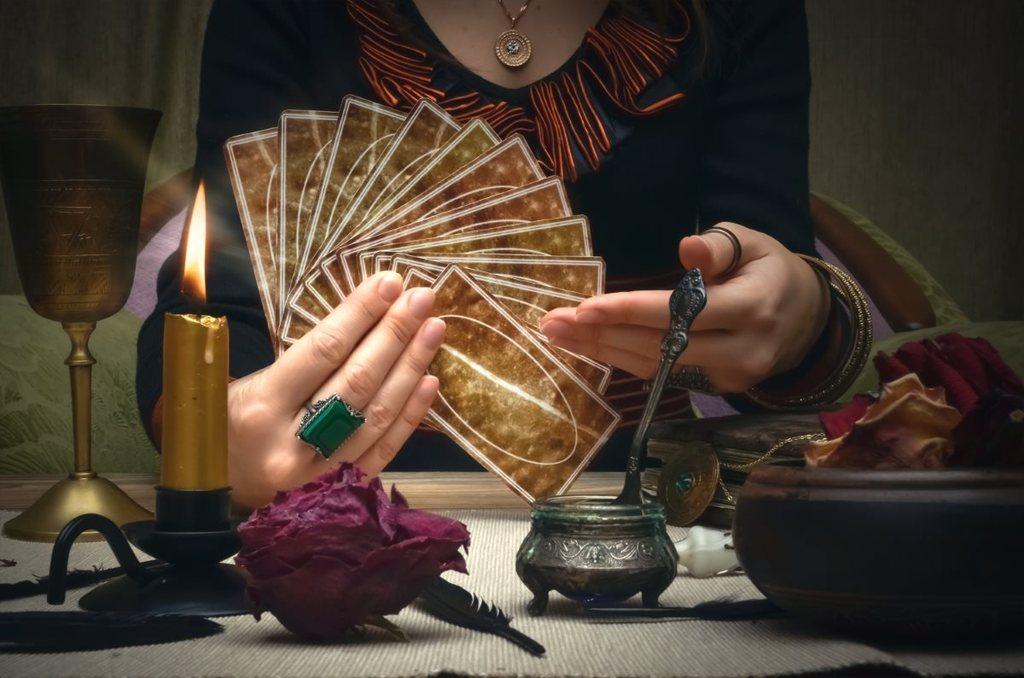 Definition: Lying outside the sphere of physical science or knowledge

Psychics, or intuitives, are people born with the innate ability to connect with the collective unconscious or who have developed this muscle through meditation, spiritual development and mindful living. Almost everyone recognises moments when they have had a flash of intuition. For psychics, it is a regular occurrence rather than an unusual one.

A psychic is someone who demonstrates exceptional sensitivity, perception, or understanding of the nonphysical world. 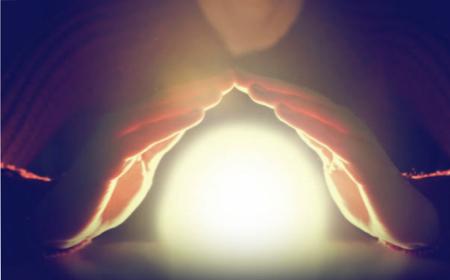 Definition: A person with a supernatural ability to perceive events in the future

A clairvoyant, or psychic medium, is someone with clear vision, able to see beyond the physical realm to gain a vision of what is to come. 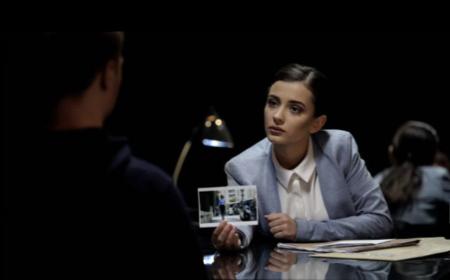 A medium is a go-between for the physical realm and non-physical realm, similar to Hermes acting as the messenger of the gods for mortals in Greek mythology. Mediums mediate communication between the dead and the living as well as connect people with more evolved beings, often referred to as spirit guides. Some mediums go into trance states, while others remain present during the encounter.

A medium is someone with the ability to communicate with spirit guides or the spirit of a person who has passed on, in order to relay important messages or comfort those still alive.

A tarot reading with me follows the psychic approach in that I am able to tune into your energy and the cards, feeling or sensing elements of your past, present & future. Essentially, I rely on my intuition and psychic ability to give you the messages which are important.

I am NOT a fortune teller, nor do I answer precise questions such as “When will I meet the love of my life?” Many of my clients have remarked that the insights I gave them proved to be surprisingly accurate but I cannot tell you ahead of time if you will be given a very detailed piece of information.

If there is an area of your life you do want guidance about, I encourage you to hold that intention while you are shuffling and cutting the cards. Just to repeat, if you are looking for a fortune teller I recommend you look for a dedicated clairvoyant reading rather than a tarot reading. 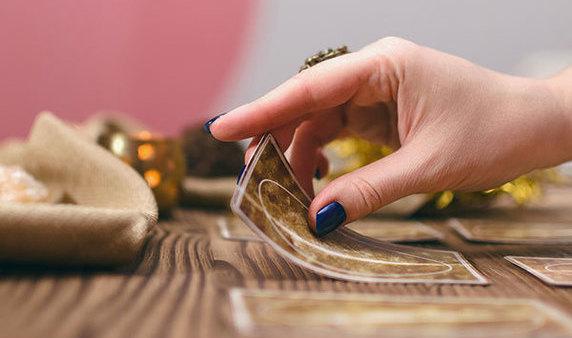 This short video answers some commonly asked questions about how tarot works. The FAQS section below covers other questions relating to tarot readings.

A standard tarot deck of 78 cards leads to 3, 651, 648 possible combinations in a 3-card spread. Imagine the combinations the collective unconscious can create in one of the 10-card spreads I use?

While exploring the mysterious nature of existence Carl Jung coined the term Synchronicity, or meaningful coincidences, to argue for the existence of the paranormal. His view was that the more a person pursues inner development the stronger the messages they receive from higher intelligence.

Jung’s work on archetypal imagery, concepts like the collective unconscious and synchronicity, have helped validate the practice of tarot reading as an instrument to connect people with their inner-selves. As he expressed it:

“They [tarot] are sort of archetypal ideas, of a differentiated nature, which mingle with the ordinary constituents of the flow of the unconscious, and therefore it is applicable for an intuitive method that has the purpose of understanding the flow of life, possibly even predicting future events…” 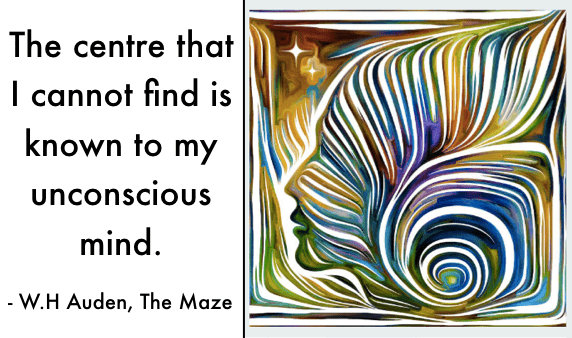 I look forward to working with you ~ Ginny Shearer

Book A Reading With Me 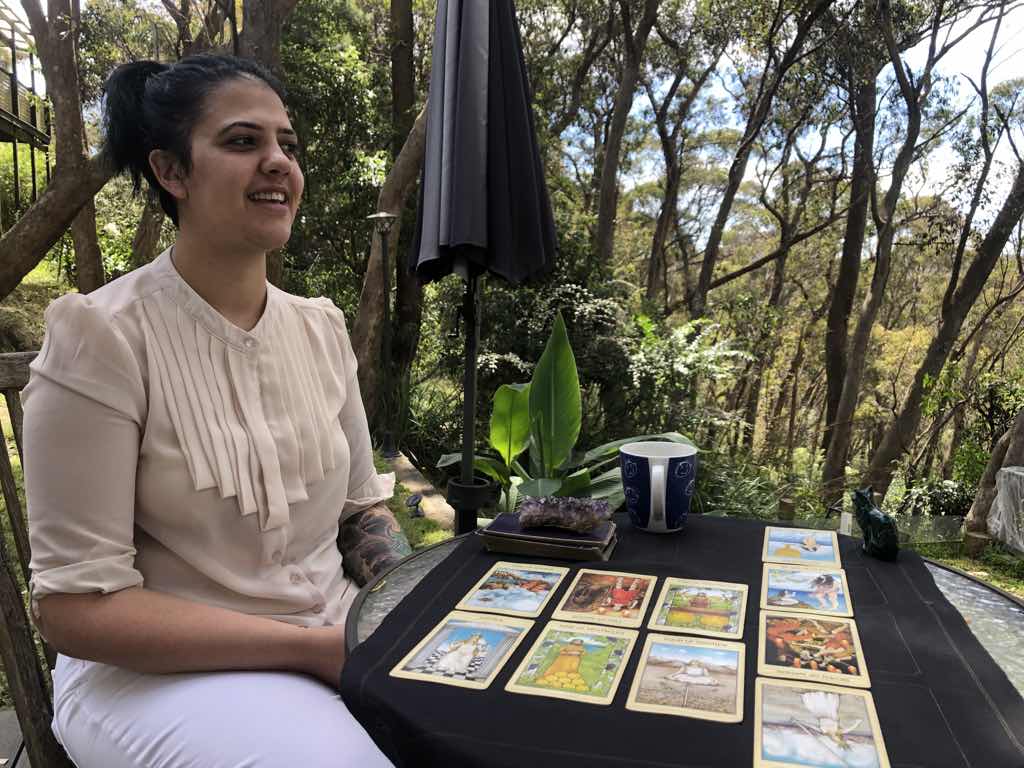 Our Wellness Centre backs onto bushland, allowing nature to centre you for a reading

The following articles go into some greater depth on the psyche and how tarot can be a powerful bridge in linking our conscious minds and the infinite wisdom of the collective unconscious.

Before Booking a Tarot Card Reading in Sydney …

...you might find my youtube video useful in describing how a reading can help you understand yourself better, instigate your inner journey and help you move forward in your life.

Would you like to learn tarot reading? I offer an introductory and intermediate tarot reading course in Sydney. Our group tarot class is fun and illuminating. 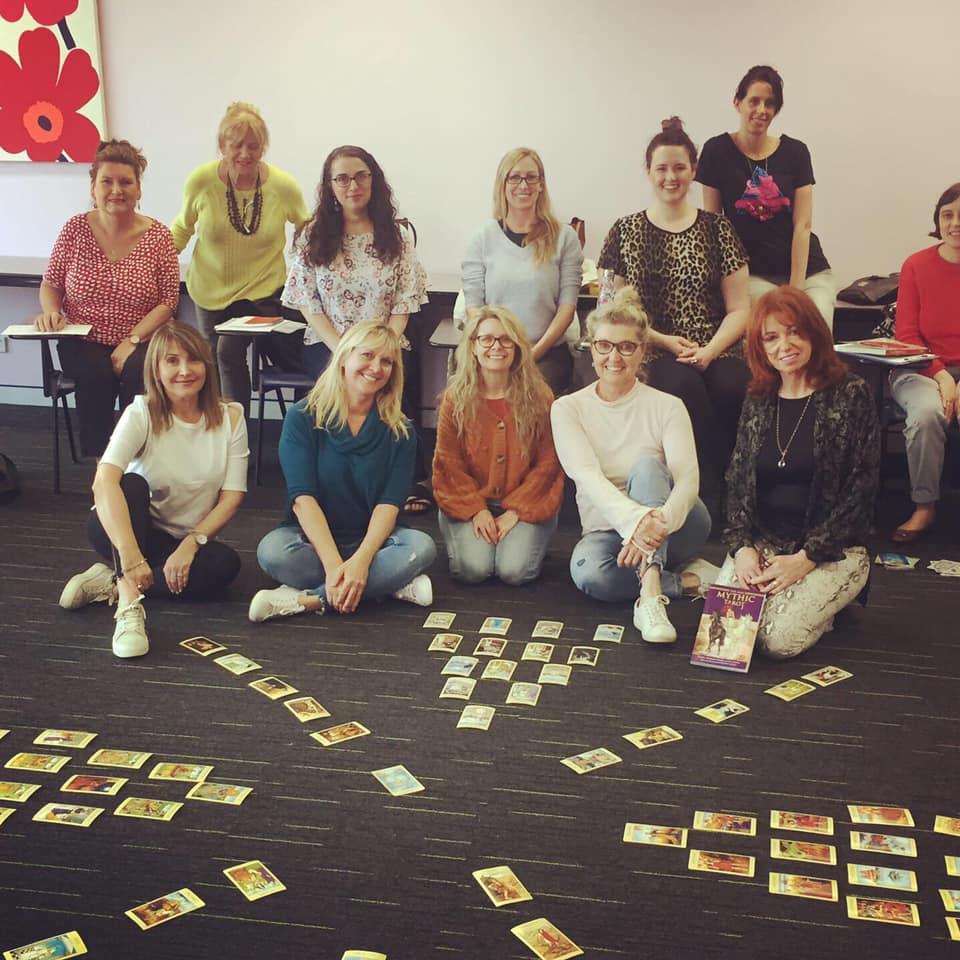 FIND OUT ABOUT MY TAROT COURSES IN SYDNEY 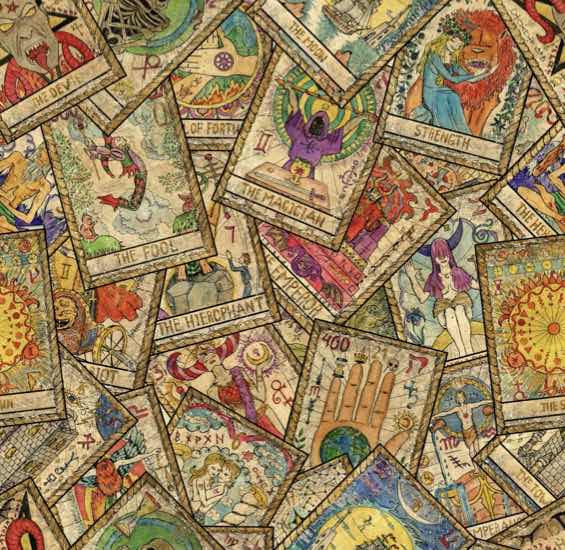 Tarot decks have long been used as a harmless and fun activity. One person looks at the cards or images and makes some interpretations or projections based on how well they know the person they are reading for. Neither takes it too seriously.

Others believe it to be a form of hocus-pocus used by unscrupulous people to prise money out of trusting, or desperate people. As with any field of expertise, it is true that some practitioners are exploitative. The combination of a few bad apples and a reverence for rationalism sees many people throwing the baby out with the bathwater.

A third option is that it is used in a bona fide way. It is worth nothing that Western Psychology, or the scientific study of the mind, is a relatively new field. Freud is often dubbed as the father of Psychology. His ideas are only a century old.

The sacred approach, common to tribal and ancient cultures, is much older. It sees people receiving their greatest learning from intuition, dreams and story. Carl Jung was a student of Freud’s who moved beyond his ideas, which were very ego oriented. Jung possessed more balance in terms of masculine and feminine approaches. One could say he was more soul oriented or holistic.

Beyond the Conscious Mind 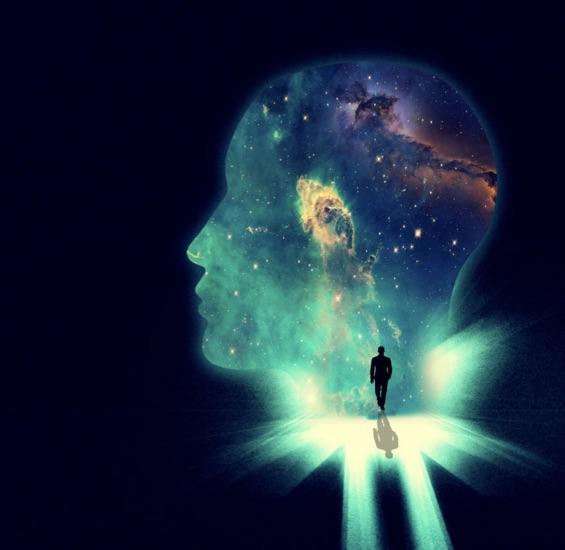 Like Freud, Jung concluded that we each have our own Personal Conscious that holds all our memories and knowledge. Less than 10% of an icebergs volume is viewable from the surface. Psychology suggests that our Personal Conscious is just the minority of our real makeup.

Our Personal Unconscious holds memories we have forgotten or repressed. Not only is it harder to access, we’re generally unaware of it. Despite our ignorance, it still makes an impact and reveals itself as imbalances or neuroses in an individual. Psychology has often employed hypnosis to access these memories for therapeutic reasons. Just as hypnosis can bypass ones subconscious gatekeeper, so can the Tarot reveal repressions through their imagery.

Jung argued that there was another Unconscious realm, that of the Collective Unconscious. It is not personal to particular individuals; but connects and belongs to us all. It is made up of Symbols and Archetypes. Jung described it as, “The transcendental wisdom that guides mankind, a universal library of knowledge that is innate, rather than acquired by education or conscious effort.”

An Archetype is a pattern of behaviour that repeats itself over and over again. Every situation in life has an Archetype or Archetypal Behaviour associated with it. Films, books and other forms of culture are replete with them. Take a popular Archetype, like the Hero. 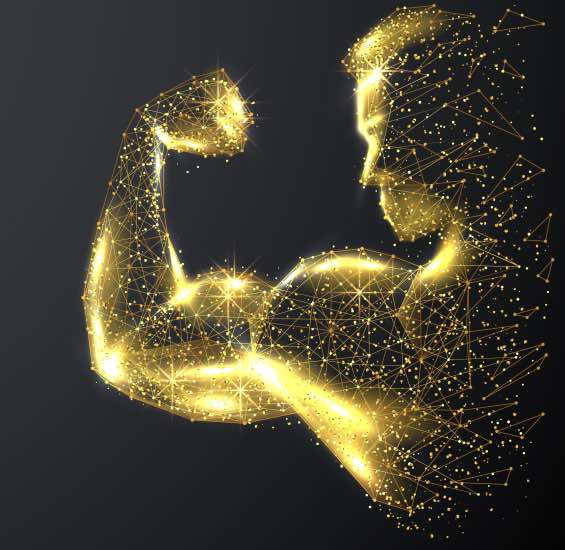 Instead of engaging with the empowering theme of the Hero Archetype, they opt for the Orphan Archetype, which retreats into victimhood or fantasy thinking that requires no personal participation in an outcome. Lacking love, it’s easy to dream of being rescued by a prince (codependency), or lacking money, imagining a lottery win is more rewarding than dealing with the fact that one fails to practice discipline, forward planning or delayed gratification.

Carl Jung once pointed out that, “Until you make the unconscious conscious, it will direct your life and you will call it fate.” Becoming aware of your Unconscious mind and its messages for you is very valuable. But it is only when we act on things that our circumstances change.

Take a common, real world example. Let’s say a spread reveals a theme of having a manipulative, narcissistic partner in your life. This may service with The Queen of Swords whose shadow side is that of a master game player, liar, manipulator who believes their own delusions. The symbolism is shared with a client who then goes on to talk about having a controlling or abusive partner. Maybe they knew that very clearly before they came.

Wanting to find greater alignment and passion for your work? Read an extract from The Different Drummer to see if this ebook resonates with you.